I have been reading the special relativity part of the Feynman's Lecture on Physics, despite not finding quite satisfied, which may happen to be caused by Mr. Feynman's mastery and intuition on Quantum Electrodynamics but not Theory of Relativity. So after days of trials, I ended up with a self-satisfied-primer-oriented explanation here.

As Feynman wrote in his lecture notes, Newton's classical mechanics is invariant under Galilean transformation, which Maxwell's profound equations failed to comply with. This was quite annoying at that time cause the , the speed of light, in the equation has got unspecified reference frame. And based on people's intuition at that time, they postulated that the should be with respect to a media called ether, which is permeable in vacuum. A "brilliant" idea following that postulation is that one, by measuring the speed of light on earth, can tell the speed of earth with respect to ether. That idea was carried out in the Michelson–Morley experiment.

However, the experiment failed, there is no interference occurred in the experiment. To explain that, Feynman said "brilliant" Hendrik Lorentz found doing some mathematical tricks (namely, Lorentz transformation) can solve this. However, that is quite physically counter-intuitive.

Indeed, Einstein thought that the principle of relativity and light speed immutability (as shown by the experiment) should be both held. So, he had got two profound postulates which are our assumption for later discussions here. Two postulates are:

Einstein said graphs shall be easier to work with, therefore, we are here to use graphs. One graph, invented by Minkowski, is quite helpful to study the special theory of relativity. That graph incorporates both the time and the position to describe stuffs called events (explosion, meeting, clock-ticking, etc.) at a given position in space and a give time (that is where the word space-time comes from). 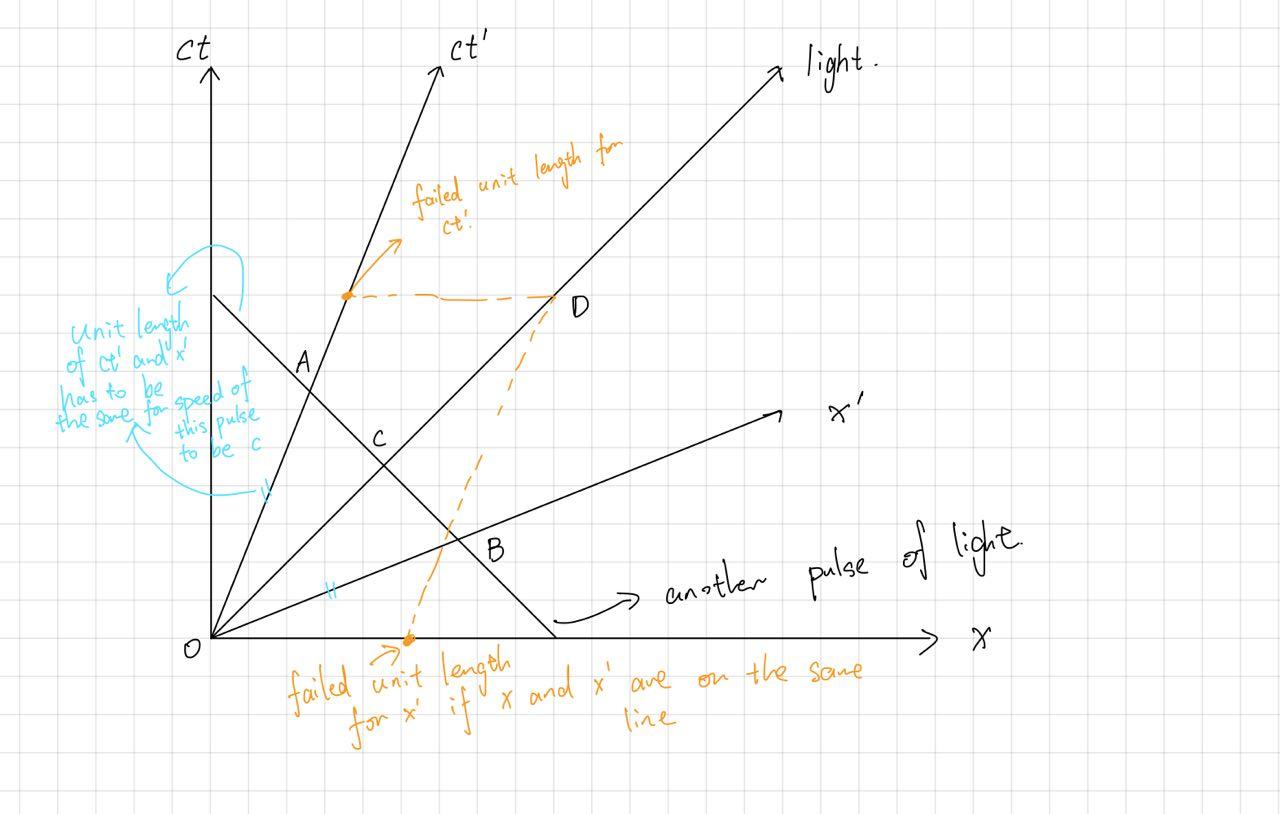 Above is a Minkowski diagram. line is the time axis measured in meter (yes! we measure time in meter). Let us define the inertial reference frame as the frame formed by and . We also define the unit length of both time and position axis as the "length on the axis" used to express . This means the unit length is indeed equivalent to length for which and .

Line is the locus of a moving particle (clock) with velocity seen by observer in . (it's just like a diagram!). Since the particle doesn't undertake any acceleration with respect to a non-accelerating inertial frame , with respect to that particle, we can also form an inertial frame called . Then, what we need to do is to find out what the looks like and what are the unit length of . If we happen to know both, we can express any event (point) on the plane with respect to using change of base in linear algebra!

We shall now see that for any inertial frame, the angles its time and position axes make with positive-sloped light pulse are the same. Firstly, draw a negative-sloped light pulse locus. Let be the unit length on and be the unit length on . In order for it to have speed , we need to have . Let and . Likewise, we also have to have . It follows that both and .

Now our task is to find what is, or to find the unit length for . 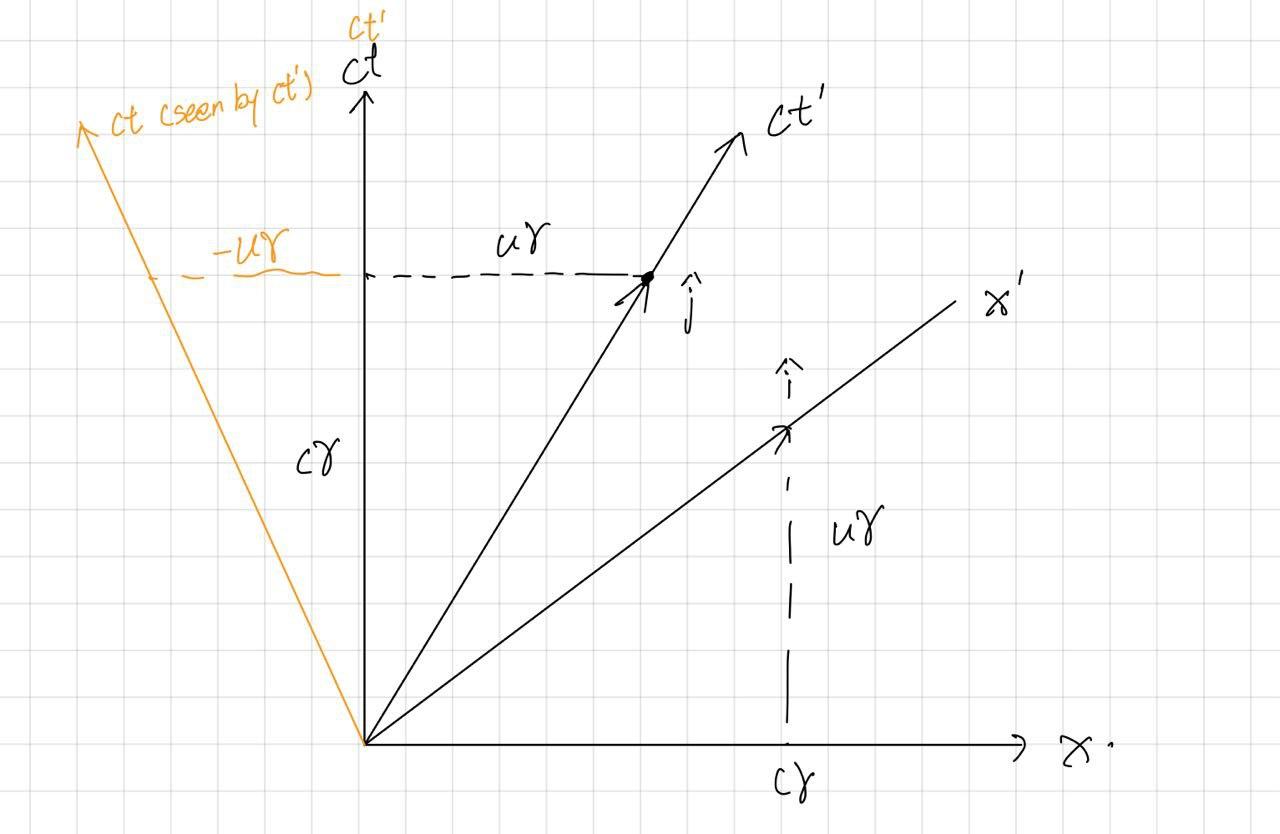 For this picture, we suppose there is a constant such that

where is the unit vector of . Similarly, we define

Likewise, because of the reciprocity (or every inertial frame is equivalent) and moves with with respect to , we have:

This also means the standard Lorentz transformation matrix is:

One may be misled to write following:

this supposes that under basis is the same as under basis of . However, it is not true. the above equation is equivalent as writing

The first matrix cannot be shown to be equivalent to matrix , therefore, it fails the reciprocity and should never be right at the first place.

We all happen to know famous conclusions from Special Theory of Relativity (STR) like "things are getting distorted", "we can make time pass slower", etc. 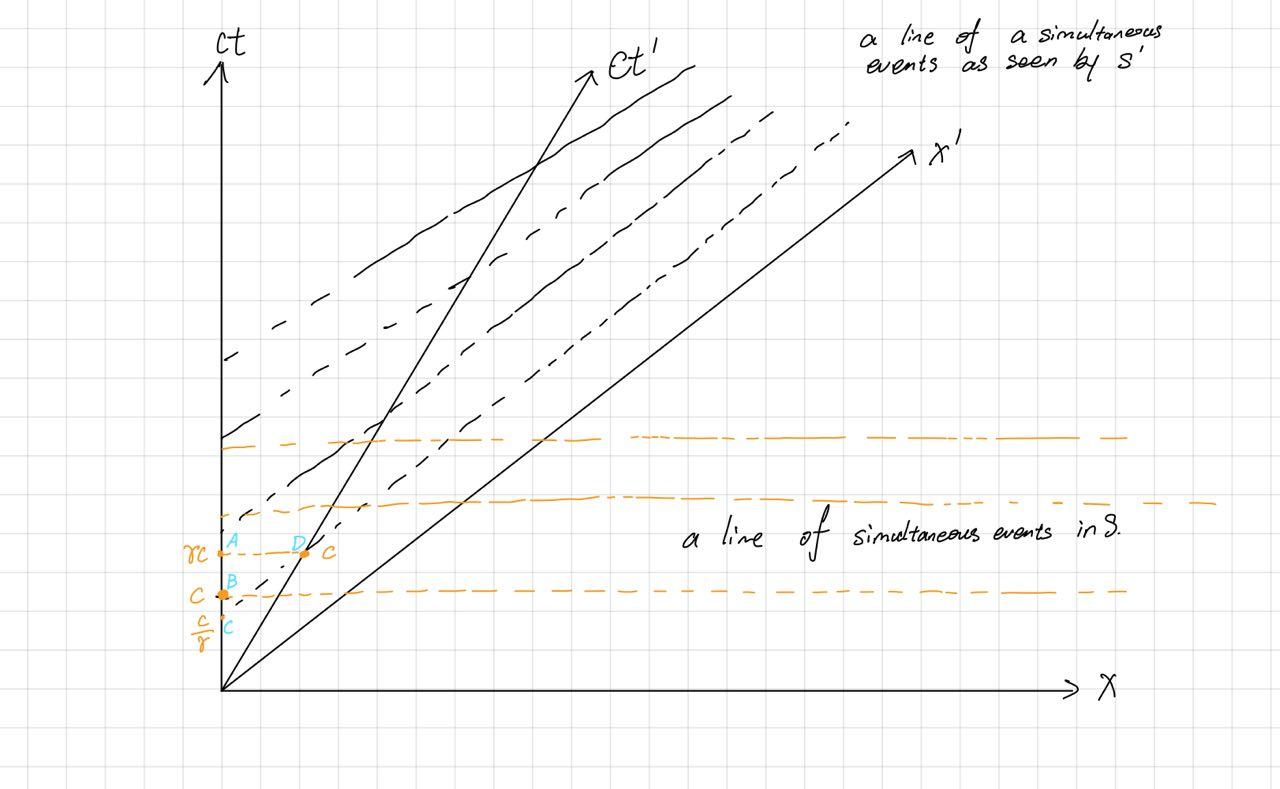 For , all the events on any slanted, positive-sloped line is simultaneous. However, one can easily see from the graph that this is not true for an observer in . Vice versa.

From this point, we can see several conclusions arising.

We analyze these one by one.

The space-time interval is a quantity that is invariant under lorentz transformation.

where is the position vector. Under two dimensional space-time ( and ), we have equivalently:

We also define proper time as the time measured by a clock following its movement which may not be inertial (i.e. can undergo acceleration). And this quantity should be agreed under any inertial reference frame (i.e. invariant under lorentz transformation).

We now "bind" the clock to the moving particle. Luckily, we can have a local infinitesimal-short-lasting inertial frame in which the clock (and the particle) is at rest (i.e. ), and by definition, in that local rest frame, . Therefore, assuming (later we shall see that this is called time-like events),

Thus, we can see

Likewise, given (later we shall see that this is called space-like events), we shall have proper distance differential by

(Here we cannot write it as an integral with respect to time because time may not be a parameter to this as the locus is always have slope smaller than 1).

Coordinate time for event under one inertial frame is simply the time component of that event under the frame.

Coordinate position is likewise the position component under the frame for one particular event.

Finally, we can analyze the conclusions. 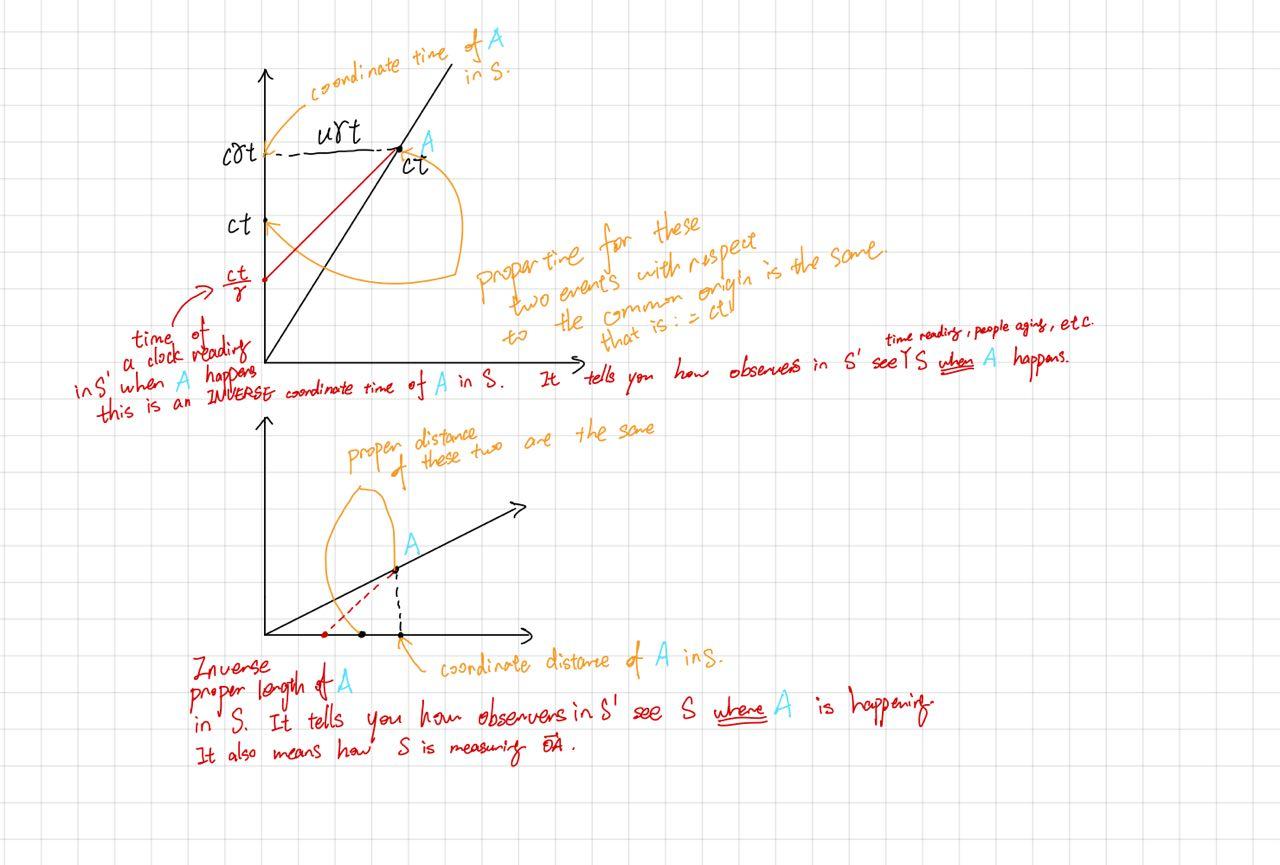 As shown above, coordinate time is reason for time dilation (). However, the same event measured at the same place under is (time "contraction").

Same argument can be employed for the length. However, there is a very interesting phenomenon. 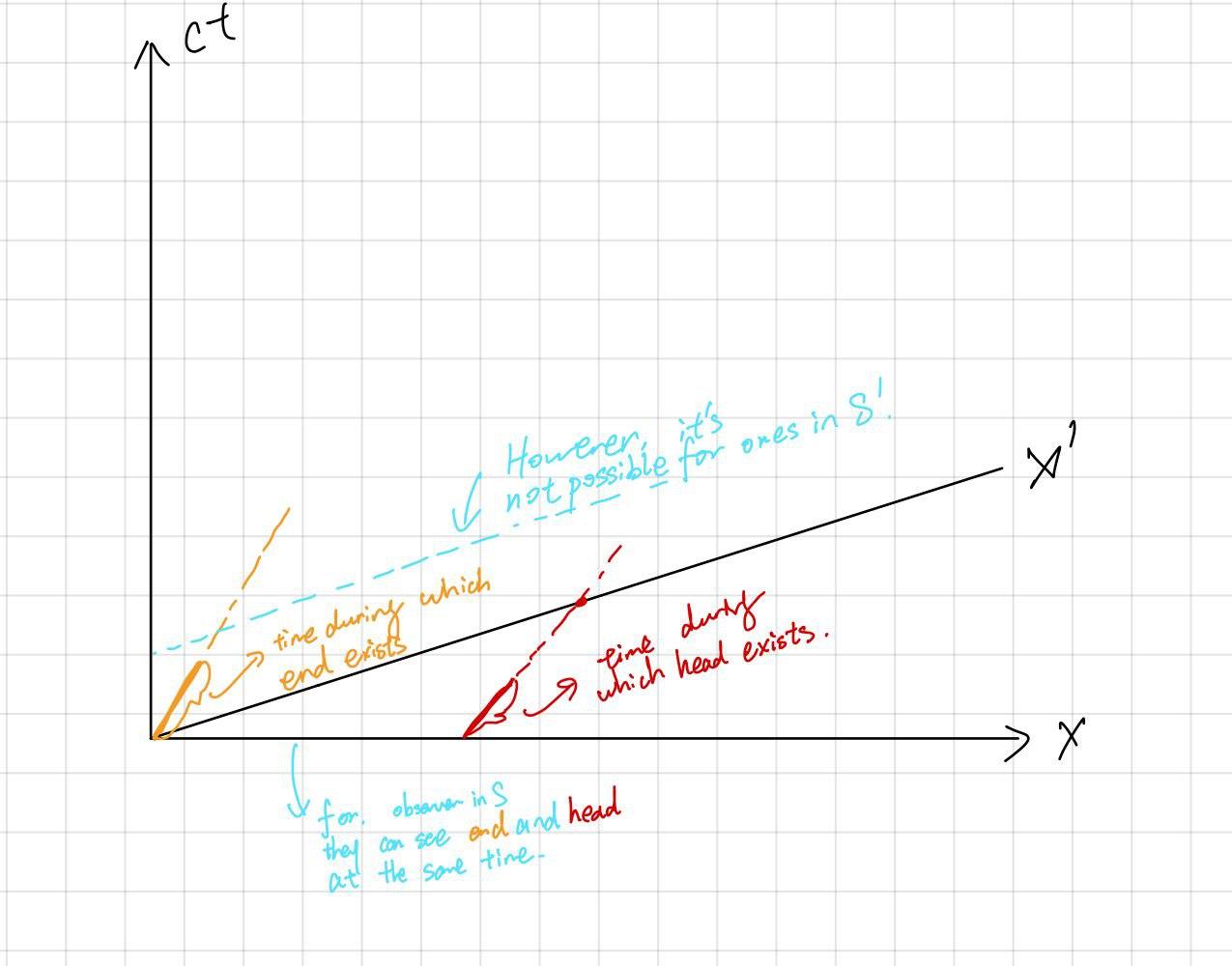 In the above picture, one in can see both event (head and tail) at the same time. However, it is not the case for ones in . They can only see either head or tail.

Do head and tail exist at the same time? It depends on your reference frame. And indeed, above example illustrates how absurd it is to compare phenomenons between frames together. One shall not do that unless things don't change, etc.

In addition to that, it is also pretty easy to see comparison between proper events makes sense if and only if both locuses start and end at the same event. It also follows that at least one of these two locus undergoes acceleration if the proper time differ. One shall be able to further prove that the one undergoing acceleration has less proper time.

Proof is like this. Take the inertial frame in which the inertial locus is in as our reference frame for the rest of the proof. Since another locus is accelerating, it has some velocity with respect to our frame. Therefore the integrand for some time intervals, resulting in a smaller area under the curve and hence proper time.

The following video explained it intuitively.

On the other hand, proper time is shorter for accelerated clock is also a direct argument for this paradox. Brother on the ship experienced less time, but he saw brother on earth experiencing longer time (see picture with "inverse" proper time function above). Those lines are continuously sweeping out the time axis of brother-on-earth frame.

Another thing to note is that it is mathematically impossible to have a sharp turnaround because in that way is not differentiable, giving no velocity at the turning point. Even if it is possible, you will see your brother on earth age within just a snap.

You can be younger under acceleration.

There are lots to learn in STR, namely, Relativistic dopler's effect, energy-mass equivalence, etc. I didn't cover these, but hopefully with basic tools here and infinite amount of mathematical talent, you can derive out all by yourself.

I am wondering if there is a physical explanation that relates relativity of simultaneity and the fact that information travels at the speed of light.

I didn't use a lot of mathematics here and drew a lot of graphs, because I came to understand: to learn physics well, you should see phenomenons without using heavy equations.